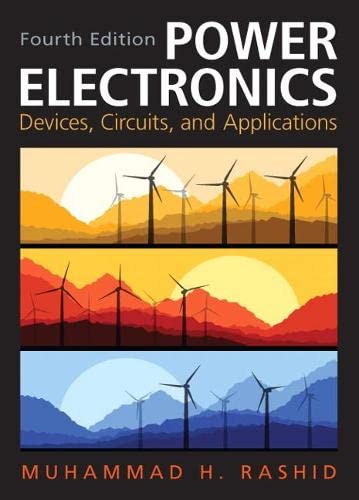 For junior or senior undergraduate students in Electrical and Electronic Engineering. This text is also suitable for individuals interested in the fields of electrical and electronic engineering. This text covers the basics of emerging areas in power electronics and a broad range of topics such as power switching devices, conversion methods, analysis and techniques, and applications. Its unique approach covers the characteristics of semiconductor devices first, then discusses the applications of these devices for power conversions. Four main applications are included: flexible ac transmissions (FACTs), static switches, power supplies, dc drives, and ac drives.

Muhammad H. Rashid is employed by the University of West Florida as Professor of Electrical and Computer Engineering. Previously, he was employed by the University of Florida as Professor and Director of UF/UWF Joint Program. Rashid received his B.Sc. degree in electrical engineering from the Bangladesh University of Engineering and Technology, and M.Sc. and Ph.D. degrees from the University of Birmingham in UK. Previously, he worked as Professor of Electrical Engineering and Chair of the Engineering Department at Indiana University-Purdue University at Fort Wayne. He also worked as Visiting Assistant Professor of Electrical Engineering at the University of Connecticut, Associate Professor of Electrical Engineering at Concordia University (Montreal, Canada), Professor of Electrical Engineering at Purdue University Calumet, and Visiting Professor of Electrical Engineering at King Fahd University of Petroleum and Minerals (Saudi Arabia). He has been employed as a design and development engineer with Brush Electrical Machines Ltd. (England, UK), as a research engineer with Lucas Group Research Centre (England, UK), and as a lecturer and head of Control Engineering Department at the Higher Institute of Electronics (in Libya and Malta). Dr. Rashid is actively involved in teaching, researching, and lecturing in electronics, power electronics, and professional ethics. He has published 17 books listed in the US Library of Congress and more than 160 technical papers. His books are adopted as textbooks all over the world. His book Power Electronics has translations in Spanish, Portuguese, Indonesian, Korean, Italian, Chinese, and Persian, and also the Indian economy edition. His book Microelectronics has translations in Spanish in Mexico and in Spain, Italian, and Chinese. He has received many invitations from foreign governments and agencies to give keynote lectures and consult, from foreign universities to serve as an external examiner for undergraduate, master's, and Ph.D. examinations, from funding agencies to review research proposals, and from U.S. and foreign universities to evaluate promotion cases for professorship. Dr. Rashid has worked as a regular employee or consultant in Canada, Korea, United Kingdom, Singapore, Malta, Libya, Malaysia, Saudi Arabia, Pakistan, and Bangladesh. Dr. Rashid has traveled to almost all states in USA and to many countries to lecture and present papers (Japan, China, Hong Kong, Indonesia, Taiwan, Malaysia, Thailand, Singapore, India, Pakistan, Turkey, Saudi Arabia, United Arab Emirates, Qatar, Libya, Jordan, Egypt, Morocco, Malta, Italy, Greece, United Kingdom, Brazil, and Mexico). He is Fellow of the Institution of Engineering and Technology (IET, UK) and Life Fellow of the Institute of Electrical and Electronics Engineers (IEEE, USA). He was elected as an IEEE Fellow with the citation "Leadership in power electronics education and contributions to the analysis and design methodologies of solid-state power converters." Dr. Rashid is the recipient of the 1991 Outstanding Engineer Award from the Institute of Electrical and Electronics Engineers. He received the 2002 IEEE Educational Activity Award (EAB), Meritorious Achievement Award in Continuing Education with the following citation "for contributions to the design and delivery of continuing education in power electronics and computer-aided simulation." He is the recipient of the 2008 IEEE Undergraduate Teaching Award with the citation: "For his distinguished leadership and dedication to quality undergraduate electrical engineering education, motivating students and publication of outstanding textbooks." Dr. Rashid is currently an ABET program evaluator for electrical and computer engineering, and also for (general) engineering program. He is the series editor of Power Electronics and Applications and Nanotechnology and Applications with the CRC Press. He serves as the editorial advisor of Electric Power and Energy with Elsevier Publishing. He lectures and conducts workshops on Outcome-Based Education (OBE) and its implementations including assessments. He is a distinguished lecturer for the IEEE Education Society and a regional speaker (previously Distinguished Lecturer) for the IEEE Industrial Applications Society. He has also authored a book The Process of Outcome-Based Education-Implementation, Assessment and Evaluations.