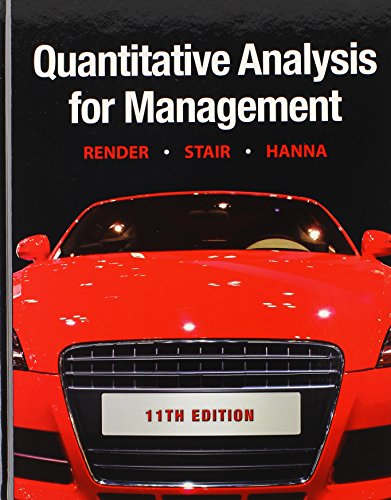 "Barry Render" is the Charles Harwood Distinguished Professor of Management Science at the Roy E. Crummer Graduate School of Business at Rollins College in Winter Park, Florida. He received his M.S. in Operations Research and his Ph.D. in Quantitative Analysis at the University of Cincinnati. He previously taught at George Washington University, the University of New Orleans, Boston University, and George Mason University, where he held the GM Foundation Professorship in Decision Sciences and was Chair of the Decision Science Department. Dr. Render has also worked in the aerospace industry for General Electric, McDonnell Douglas, and NASA.

Dr. Render has also been honored as an AACSB Fellow and named as a Senior Fulbright Scholar in 1982 and again in 1993. He was twice vice-president of the Decision Science Institute Southeast Region and served as Software Review Editor for Decision Line from 1989 to 1995. He has also served as Editor of the "New York Times" Operations Management special issues from 1996 to 2001. Finally, Professor Render has been actively involved inconsulting for government agencies and for many corporations, including NASA; the FBI; the U.S. Navy; Fairfax County, Virginia; and C8zP Telephone.

He teaches operations management courses in Rollins College's MBA and Executive MBA programs. In 1995 he was named as that school's Professor of the Year, and in 1996 was selected by Roosevelt University to receive the St. Claire Drake Award for Outstanding Scholarship.

"Ralph Stair" has been Professor of Management Science at Florida State University for twenty years and is now entering its phased retirement program. He received a B.S. in Chemical Engineering from Purdue University and an MBA from Tulane University. Under the guidance of Ken Ramsing and Alan Eliason, he received his Ph.D. in operations management from the University of Oregon.

Dr. Stair divides his time between Florida and Colorado. He enjoys skiing, biking, kayaking, and other outdoor activities.

"Michael E. Hanna" is Professor of Decision Sciences at the University of Houston-Clear Lake (UHCL).