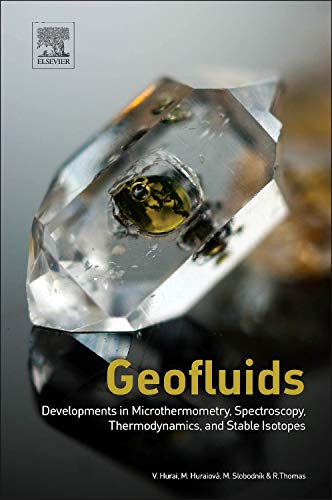 Geofluids: Developments in Microthermometry, Spectroscopy, Thermodynamics, and Stable Isotopes is the definitive source on paleofluids and the migration of hydrocarbons in sedimentary basins―ideal for researchers in oil and gas exploration.

There’s been a rapid development of new non-destructive analytical methods and interdisciplinary research that makes it difficult to find a single source of content on the subject of geofluids. Geoscience researchers commonly use multiple tools to interpret geologic problems, particularly if the problems involve fluid-rock interaction. This book perfectly combines the techniques of fluid inclusion microthermometry, stable isotope analyses, and various types of spectroscopy, including Raman analysis, to contribute to a thorough approach to research. Through a practical and intuitive step-by-step approach, the authors explain sample preparation, measurements, and the interpretation and analysis of data related to thermodynamics and mineral-fluid equilibria.

Vratislav Hurai obtained his master's degree in mineralogy, geochemistry and economic geology (1979), his PhD. (1989), and his Habilitation (2003) at Comenius University in Bratislava, where he worked in 1980-1994 and 2001-2006 in various full-time positions and till 2012 under part-time contracts. In 1994-2000, he joined the Laboratory of Isotope Geology at the Geological Survey of Slovak Republic in Bratislava. Since 2006, he is a senior researcher at the Geological Institute of Slovak Academy of Sciences, where he received his DrSc. degree in 2009. In 1990-1991 and 1996 he was a post-doctoral research fellow of the Alexander von Humboldt Foundation at the Georg-August University of Göttingen in Germany. While being assistant and associate professor at the Department of Mineralogy and Petrology of Comenius University, he taught courses on Isotope Geology, Genetic Mineralogy, Fluids in Geological Processes, Heavy and Accessory Minerals. Since his university studies, Hurai is engaged in the study of fluids in all geologic environments, including siderite, magnesite and polymetallic deposits, hydrocarbon prospects, deep mantle and crust, and high-grade metamorphic rocks. Hurai is author or co-author of 43 research articles published in impacted SCI journals.