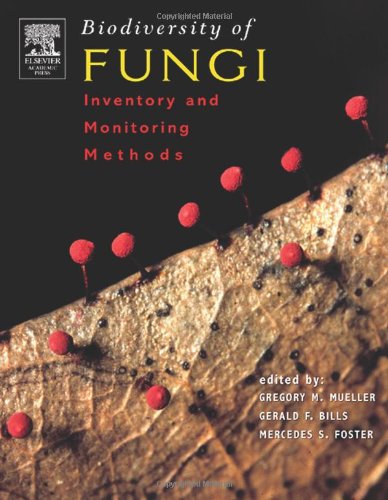 "The overall layout of this text makes it easily accessible as a reference, with illustrations and stunning color photographs supplementing the text where needed...the comprehensiveness of this text makes it a must-have reference for mycologists, ecologists, plant pathologists, fungal pathologists, and anyone else interested in fungal biodiversity." --Dawn R. Black, Dept. of Environmental & Plant Biology, Ohio University, in JOURNAL OF THE TORREY BOTANICAL SOCIETY, 2005

"This is a library tome and I am sure it will generate great interest amongst students who have the privilege and luxury of attending a tailored institute course..." --Roy Watling, in MYCOLOGIST, 2005

"Anywhere you enter the book, you will find something to pique your interest. Sit down and read any one chapter and be transported into that world." --Darlene Southworth, Southern Oregon University, in PLANT SCIENCE BULLETIN, 2005

"This is an excellent book which has appeared at a time when biodiversity discussions are in the forefront of ecologists as a whole. If we are to progress further with understanding the development and function of communities of fungi and, especially if we are to attempt to relate the current knowledge of fungal diversity to fungal and ecosystem functioning, we need to have much more robust data on the actual diversity of fungi at all scales of resolution and improve out knowledge of their functional attributes. This book not only shows us the way to go, but tells us how to do so in a way that will maximize the quality of the data generated. The editors and chapter authors are to be congratulated on producing such a colourful and informative text." --John Dighton, Department of Biology, Rutgers University, Camden, in MYCOTAXON, VOL. 90, 2004

"Biodiversity of Fungi is a valuable and much-needed body of work. Graduate students, professionals, including non-mycologists, will appreciate its comprehensiveness as well as its accessible protocols...the editors have greatly simplified the overwhelming complexity of quantifying fungal diversity." --Miranda Hart, Environmental Biology, University of Guelph, in TRENDS IN ECOLOGY AND EVOLUTION

"Biodiversity of Fungi is a welcome addition to my reference bookshelf. I have often wished for a book that combined fungal sampling methods in one place, and I am grateful that this enormous team of editors and authors has completed this heroic undertaking." --BIOSCIENCE

Biodiversity of Fungi is essential for anyone collecting and/or monitoring any fungi. Fascinating and beautiful, fungi are vital components of nearly all ecosystems and impact human health and our economy in a myriad of ways. Standardized methods for documenting diversity and distribution have been lacking. A wealth of information, especially regrading sampling protocols, compiled by an international team of fungal biologists, make Biodiversity of Fungi an incredible and fundamental resource for the study of organismal biodiversity.

Chapters cover everything from what is a fungus, to maintaining and organizing a permanent study collection with associated databases; from protocols for sampling slime molds to insect associated fungi; from fungi growing on and in animals and plants to mushrooms and truffles. The chapters are arranged both ecologically and by sampling method rather than by taxonomic group for ease of use. The information presented here is intended for everyone interested in fungi, anyone who needs tools to study them in nature including naturalists, land managers, ecologists, mycologists, and even citizen scientists and sophiscated amateurs.