Verwandte Artikel zu The Weather Experiment: The Pioneers who Sought to...

Moore, Peter The Weather Experiment: The Pioneers who Sought to see the Future

The Weather Experiment: The Pioneers who Sought to see the Future 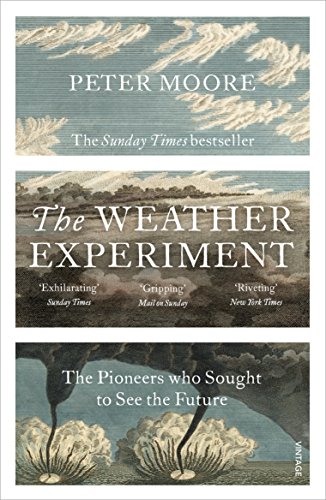 **Book of the Week on Radio 4**'Gripping' The Times'Exhilarating' Sunday TimesIn an age when a storm was evidence of God's wrath, pioneering meteorologists had to fight against convention and religious dogma to realise their ambitions. But buoyed by the achievements of the Enlightenment, a generation of mavericks set out to unlock the secrets of the atmosphere. Meet Luke Howard, the first to classify the clouds, Francis Beaufort, quantifier of the winds, James Glaisher, explorer of the upper atmosphere by way of a hot air balloon, Samuel Morse, whose electric telegraph gave scientists the means by which to transmit weather warnings, and at the centre of it all Admiral Robert FitzRoy: master sailor, scientific pioneer and founder of the Met Office., Peter Moore's exhilarating account navigates treacherous seas, rough winds and uncovers the obsession that drove these men to great invention and greater understanding.

"Richly researched, exciting... It is both scientific and cultural history, of prizewinning potential and as fresh and exhilarating throughout as a strong sea breeze." (James McConnachie Sunday Times)

"Superbly researched and grippingly written... Moore is at least as interested in the personalities and their rivalries, and the sheer spendour and catastrophies of weather itself - storms and shipwrecks, heatwaves and floods (all vividly described) - as by the science. And he weaves it together, deftly picking up threads left dangling in earlier chapters, darting across continents, embracing swashbuckling sea captains and fastidious bureaucrats, penny-pinching politians and mad inventors, with as sharp an eye for eccentricity, absurdity and tragedy as for genius. The result is a panorama of the entire Victorian era." (Richard Morrison The Times)

"The Weather Experiment is a genuinely gripping read and demonstrates how scientific ideas can come ahead of the time" (Gavin Pretor, 4 stars Mail on Sunday)

"Moore is the rare science writer who can describe dew point so poetically you feel you’re with him in a twinkling field of white clover on a cool summer morning... Evocative and full of wisdom for modern times." (New York Times Book Review)

"The Weather Experiment is not the first book to have been written about FitzRoy...but Moore’s achievement is to imbue him and his work with palpable narrative life, while surrounding him with a large supporting cast of contemporaries" (The Times Literary Supplement)

"A skilful, detailed account of a complex story, in which scientific advances are far from inevitable in a world of flawed humans and bad luck... Moore's engaging, often surprising work of storytelling, written with such care and pleasure, is a fine tribute" (Daniel Hahn Spectator)

"Thought-provoking... Rich and informative ... Arnold Toynbee once railed against the view that ‘History is just one damned thing after another’. Recording weather data day in, day out must feel like one damn temperature reading after another. Yet Moore has skilfully converted decades of routine monotony into a gripping tale of derring-do." (Patricia Fara Literary Review, Book of the Month)

Peter Moore is a writer, journalist and lecturer. He teaches creative writing at City University and the University of Oxford. His first book, Damn His Blood, reconstructed a rural murder in 1806. His second, The Weather Experiment, a Sunday Times bestseller, traced early efforts to forecast the weather. He lives in London.