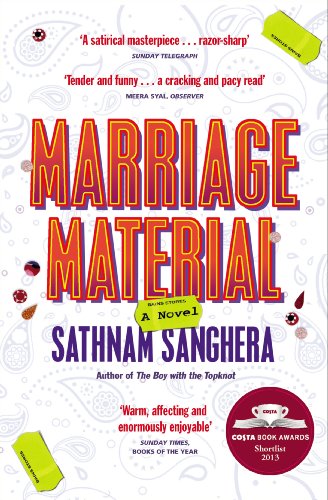 "Enormously enjoyable...Marriage Material isn’t simply an ingenious exercise in updating...Sanghera’s central subject, as in his much-praised memoir, The Boy with the Topknot, is prejudice...One of the novel’s achievements is to keep you in mind of all this while maintaining a tone of shrewdly humorous tolerance. Sanghera’s forte is wry comedy tinged with pathos...There is a concluding twist that has all the poisonous horror of finding a cobra coiled around boxes of confectionary in a corner shop...[A] warm, keenly observant and immensely appealing novel." (Peter Kemp Sunday Times)

"Having grown up in a corner shop in the West Midlands, I hoped that Sathnam Sanghera's Marriage Material would resonate. I was expecting acerbic wit, unsentimental tenderness and a Black Country setting – and it lived up to my stupid expectations. I really wanted to like it and I loved it - which never seems to happen. I usually damn things with high hopes. It was a lot of things I expected - funny and tender and scathing - but it's insanely gripping as well. So much of the newsagent detailing was completely spot on – there was plenty of my Dad in the character of Tanvir, plenty of all of my family in there really. A great achievement." (Catherine O'Flynn, author of What Was Lost)

"A satirical masterpiece ... A razor-sharp disquisition on the trials of being an Asian newsagent...Handled with a poignancy that makes it hurt to read. But those tears are soon replaced by ones of laughter ... As past and present collide in a violent, twisty finale, it is clear that the caste system of the old country is alive and dangerous. Sanghera is such an engaging and versatile writer that the pages fly by in a flurry of pathos, politics and paratha with extra butter. Not many readers will recognise this satirical mini-masterpiece as a reworking of the 1908 Arnold Bennett novel The Old Wives’ Tale, but everyone will feel richer for its uncompromising take on race relations in the Black Country." (Sunday Telegraph)

"A stunning novel ... touching and funny and feels so fresh ... it just leaps off the page. I adored it." (Deborah Moggach)

"His poignant memoir of growing up in 1980s Wolverhampton won Sathnam Sanghera an army of admirers as well as a clutch of nominations and awards. Five years on, he has turned his literary talents in the direction of fiction, with this funny and insightful first novel the result ... A thoughtful examination of the complexities of modern Britain ... An engrossing, entertaining and rewarding read." (Daily Mail)

"Subtle and often very funny prose ... What lifts this novel far above cliché is Sanghera’s deft sense of irony and self-awareness regarding his subject matter ... The family’s unfolding history is beautifully counterpointed by real-life events in the local political landscape ... Sanghera’s tender and funny book is a cracking and pacy read." (Meera Syal Observer)

"A novel that ingeniously ‘shoplifts’ (his word) characters and elements of plot from Arnold Bennett’s The Old Wives’ Tale...This dangerous material is handled with a darkly comic lightness of touch, and an impassively detached ironic tone that may owe something to Bennett ― like Bennett, Sanghera makes good use of local newspaper cuttings, letters to the editor, and contemporary fashion magazine material, which gives an unobtrusively authentic period flavour to each passing phase. This book is so well researched you hardly notice the work that’s gone into it...The mix of comedy, satire, realism and optimism is nicely judged." (Margaret Drabble Spectator)

"Sathnam Sanghera’s entertaining story is a “remix” of Arnold Bennett’s classic novel The Old Wives’ Tale ... Playful wit infuses the novel ... But behind the humour and the plot twists, is an important novel that explores an often overlooked part of this country's history ... That the story of the Victorian mercantile class told in Bennett’s novel is so easily transposed onto the community Sanghera grew up in nearly a century later is absolutely fascinating, and by recognizing and exploiting this with excellent effect, he examines the nationwide story of British immigration through the prism of the Punjabi Sikh experience." (Independent)

"A funny and touching read ... Brilliant ... A superbly updated version of Arnold Bennett’s The Old Wives’ Tale. At its heart, this is a simple story of family ... yet, all this is handled throughout with the lightest of touches, so that on reaching the end, you want to begin again to pick up the subtle nuances of this book" (Psychologies)

To Arjan Banga, returning to the Black Country after the unexpected death of his father, his family’s corner shop represents everything he has tried to leave behind – a lethargic pace of life, insular rituals and ways of thinking. But when his mother insists on keeping the shop open, he finds himself being dragged back, forced into big decisions about his imminent marriage back in London and uncovering the history of his broken family – the elopement and mixed-race marriage of his aunt Surinder, the betrayals and loyalties, loves and regrets that have played out in the shop over more than fifty years.

Taking inspiration from Arnold Bennett’s classic novel The Old Wives’ Tale, Marriage Material tells the story of three generations of a family through the prism of a Wolverhampton corner shop – itself a microcosm of the South Asian experience in the country: a symbol of independence and integration, but also of darker realities.

This is an epic tale of family, love, and politics, spanning the second half of the twentieth century, and the start of the twenty-first. Told with humour, tenderness and insight, it manages to be both a unique and urgent survey of modern Britain by one of Britain’s most promising young writers, and an ingenious reimagining of a classic work of fiction.