Young Eliot: From St Louis to The Waste Land 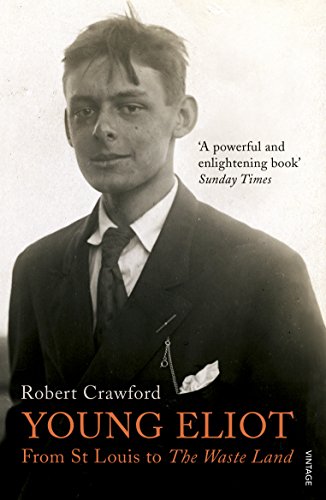 Cover worn, enpaper a little wrinkled. Shipped from the U.K. All orders received before 3pm sent that weekday.

"Young Eliot marks both a milestone and a turning point... [It] is judicious, sympathetic, meticulous.... The story it tells of a great poet’s early life is enthralling." (Robert McCrum Observer)

"This is an exemplary book... I look forward to the second volume eagerly." (Stuart Kelly Scotsman)

"A masterful biography of the canonical modernist... Drawing on sources not available to previous biographers, the author fashions an authoritative, nuanced portrait... Although Crawford modestly claims that his biography is neither “official” nor definitive, it is unlikely to be surpassed." (Kirkus)

"Crawford’s superb biography, of which this is the first of two volumes, must now be regarded as the standard work. It does not diminish or tarnish Eliot’s reputation. On the contrary, it makes one want to return to the poems and read them again and again." (Alan Taylor Herald)

"Crawford’s case is sensitive and compelling, and his account – especially of Eliot’s childhood and student years – is more richly detailed than any previous biographer’s.... A powerful and enlightening book." (John Carey Sunday Times)

Published simultaneously in Britain and America to mark the fiftieth anniversary of the death of T. S. Eliot, this major biography traces the life of the twentieth century’s most important poet from his childhood in the ragtime city of St Louis right up to the publication of his most famous poem, The Waste Land. Meticulously detailed and incisively written, Young Eliot portrays a brilliant, shy and wounded American who defied his parents’ wishes and committed himself to life as an immigrant in England, authoring work astonishing in its scope and hurt.

Quoting extensively from poetry and prose as well as drawing on new interviews, archives, and previously undisclosed memoirs, Robert Crawford shows how Eliot’s background in Missouri, Massachusetts and Paris made him a lightning conductor for modernity. Most impressively, Young Eliot shows how deeply personal were the experiences underlying masterpieces from ‘The Love Song of J. Alfred Prufrock’ to The Waste Land. T. S. Eliot wanted no biography written, but this book reveals him in all his vulnerable complexity as student and lover, stink-bomber, banker and philosopher, but most of all as an epoch-shaping poet struggling to make art among personal disasters.