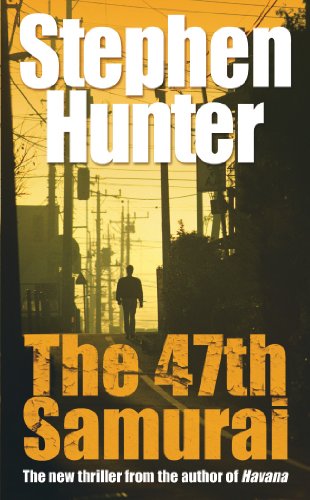 "This is the novel Hunter's fans have been waiting for....genius." (Booklist)

"Hunter is a great entertainer, one of our finest practitioners of the classic blood-soaked and propulsive American thriller. With fluid, confident prose he writes big stories of a man, mostly alone, who must go forth for us all and slay the dragon." (Daniel Woodrell, The Washington Post)

"Mr. Hunter writes [fight scenes] as well as, or better, than anyone in the business....I have only one major problem with Mr. Hunter: He doesn't write often enough." (Otto Penzler, The New York Sun)

"Bob Lee Swagger, retired marine master sniper and hero of bestseller Hunter's 1993 thriller, Point of Impact...returns in this riveting homage to the myth of the samurai....While the action builds to the inevitable climax, the joy of the journey will keep readers turning the pages." (Publishers Weekly)

Bob Lee Swagger has seen enough of war and fighting for any man: his past as a Marine Corps sniper and later as a self-appointed avenger has been a bloody one. But the hope that he is finished with combat are dashed with a visit from Colonel Philip Yano.

Yano has come to America to find a samurai sword that Bob's father took from Yano's dying father in the desperate battle for Iwo Jima in 1945. Yano believes the sword to be a national treasure, of huge political significance to whoever can get hold of it.
Bob agrees to help and delivers the sword to Yano in Tokyo, but soon afterwards the Yano family are murdered, their house burned to the ground and the sword stolen. Dark forces are at work. With the aid of Yano's old comrades , Bob enters not only Tokyo's criminal underbelly, but also the violent, obsessive world of the Samurai. Once more he is on a mission of vengeance.