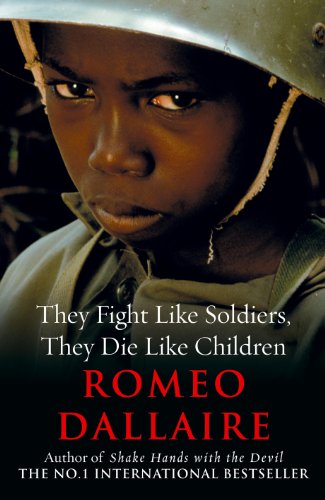 "Dallaire's sorrow and anger is impressive. The object of this book is to promote and publicise his Child Soldier Initiative. Reading it is tough, but so are the lives of children who are forced to kill." (The Times)

"Where They Fight Like Soldiers works best is in raising a myriad of questions hitherto not really addressed by other books on the subject . . . where he really does move into new territory is in suggesting practical ways to improve co-ordination between security forces and humanitarian organisations . . . It's Dallaire's highlighting of the enormous potential each and every one of us has in helping eradicate this terrible global practice that resonates most effectively. For that reason alone the author is to be congratulated and this book welcomed." (Sunday Herald)

"Part mea culpa, part manifesto, part appeal for the reader's support, the book is a rallying call for those whose common humanity is affronted by the image of children brainwashed, bullied and exploited into becoming killing machines . . . There is no doubting the conviction of this square-jawed son of a lumberjack who writes so touchingly about the crucial importance of childhood, protecting the innocent and nurturing the young . . . Twenty years ago, few people had strong views on the term `anti-personnel mine'. Through the work of committed campaigners, motivated by the desire to protect the innocent, the term is now forever tainted. Dallaire seeks to do the same for the phenomenon of child soldiers. This book is a first step towards a world where, he hopes, no child is ever forced to bear a weapon in that most adult and troubling of environments: war" (Mail on Sunday)

""Do you kill children who kill?" Romeo Dallaire's heart-shredding They Fight Like Soldiers, They Die Like Children examines that question in relentless, exhausting detail. Dallaire's intention is to expose the sheer scale, and "blatant evil" of the use of child soldiers in modern conflict, and to propose a solution to this increasingly prevalent war crime. It's a short slog of a book that leaves the reader reeling, disorientated - and surely changed . . . The case for more muscular, moral intervention in foreign lands could hardly be better made than it is here" (Sunday Times)

"The former Canadian general, Romeo Dallaire, who commanded the United nations Assistance Mission for Rwanda during the genocide of 1994, has written a book exposing these horrors and advocating that governments make this a humanitarian priority . . . He writes with great passion about the need for international aid organisations and governments to focus on the terrible consequences of ignoring this growing problem" (Independent)

In conflicts around the world, there is an increasingly popular weapon system that needs negligible technology, is simple to sustain, has unlimited versatility, and an incredible capacity for both loyalty and barbarism. What are these cheap, renewable, plentiful, sophisticated, and expendable weapons? Children.

This passionate and campaigning book is part of a personal mission against the use of child soldiers, by the three-star general who commanded the UN mission in Rwanda. When Romeo Dallaire was tasked with achieving peace there in 1994, he and his force found themselves caught up in a vortex of civil war and genocide. He left Rwanda a broken man, disillusioned, suicidal, a story he told in the award-winning international sensation Shake Hands with the Devil.

Now, in They Fight Like Soldiers, They Die Like Children, Dallaire provides an emotionally daring and intellectually enlightening introduction to the child soldier phenomenon, as well as concrete solutions for its total eradication.

"In the Rwandan civil war, I was confronted with child soldiers. I saw them, heard them, faced them down, and ultimately confronted them in the midst of a carnage that swallowed their youth and my professional warrior ethic. They, the once-children in unknown villages on the top of the thousand hills of Rwanda were real, determined, deadly, and somehow camouflaging the incredible fear they must have been repressing in the constant presence of death."

Dallaire speaks up for those without a voice - children in conflicts around the globe who do not choose to fight, but who through ill-fate and the accident of birth find their way into soldiering - in a book that addresses one of the most harrowing, urgent and important issues of our time.