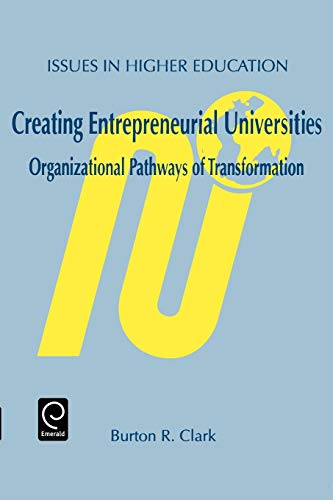 M. L. Shattock OBE, Registrar, University of Warwick, UK
A distinguishing feature of Burton Clark's work is that he has had the courage to research and write about major themes in higher education and thus open up new fields of study. In this book he has brought the subject of entrepreneurialism into the centre of discussion about the nature of academic achievement; it will be immensely influential.

Sheldon Rothblatt, Professor of History, University of California, Berkeley, USA
Here is an exploration, at once empirical and conceptual, in language that is sharp and effective, of the way we live now. Clark looks for and finds pathways out of current difficulties that address that old dilemma in the history of universities: how to escape from the vexations of the present without losing sight of the qualities that made universities so very special in the first place."

David Smith, School of Education, University of Leeds
...Clark makes a valuable contribution to debate on the future shape of universities.
Higher Education

Based on field research carried out over a two year period, this book describes processes of transformation that took place over a fifteen year period in five European universities. Five common features identified - described as "organizational pathways of transformation" - are highlighted and used to frame the case-study accounts. These pathways consist of: a strengthened steering core; an extended developmental periphery; a diversified funding base; a stimulated academic heartland; and an entrepreneurial culture. Taken together, these elements help universities overcome the growing imbalance between environmental demands and university capacity to respond that is now occurring in universities internationally. As universities come under greater pressure to change their traditional character and become more innovative and entrepreneurial, the successful implementation of new managerial perspectives is important if they are to succeed. Reconciling these changes with traditional academic values provide the concepts on which the case studies are based.