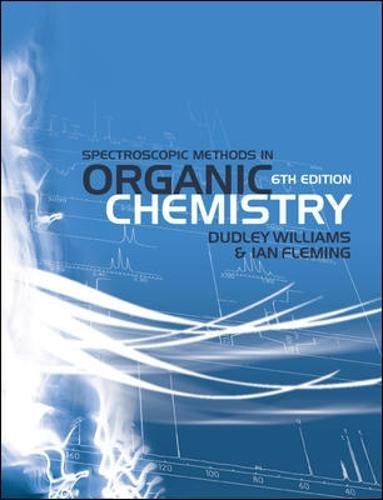 Spectroscopic Method in Organic Chemistry is a well established introductory guide to the interpretation of ultraviolet, infrared, nuclear magnetic resonance and mass spectra of organic compounds. It can be used as a textbook for a first course in the application of these techniques to structure determination, as well as a handbook for synthetic organic chemists. Updates to the new edition are as follows:Structure:The same structure will be retained in this new edition. There will be five chapters ż UV, IR, NMR and MS, followed by examples and problems. New edition content:The first four chapters have been completely rewritten to reflect changes that have taken place since the current edition published. Key changes include:żCoverage of UV and IR Spectra is more concise.żCoverage of NMR has been expanded.żCoverage of MS has been made more relevant to the everyday application of this technique.żIR Chapter has been restructured so that the spectra are displayed where they are being discussed, rather than at the end of the chapter. żExamples. All 60 MHz spectra have been replaced with new examples at 400 MHz or more.

Dudley Williams was an undergraduate at the University of Leeds (1955-1958), and obtained his PhD (1958-1961) there under the supervision of Professor Basil Lythgoe. Following postdoctoral research at Stanford University (1961-1964) with Professor Carl Djerassi, he followed an academic career in Cambridge, as a Fellow of Churchill College, and in the Department of Chemistry. His research involved developments in proton nuclear magnetic resonance and mass spectrometry, and, most famously, he and his co-workers elucidated the structure and mode of action of the clinically important antibiotic vancomycin.

Ian Fleming studied at Pembroke College, Cambridge, obtaining his PhD in 1962 in the University Chemical Laboratory supervised by Dr John Harley-Mason. Except for a postdoctoral year at Harvard (1963-1964) with Professor R. B. Woodward, and sabbatical visits to McGill University in Montreal (1972 & 1978), the University of Wisconsin in Madison (1980), and Harvard University (1990), he has spent his entire academic career in Cambridge. In research, he is best known for his work on the application of organosilicon chemistry to solving problems of regiocontrol and stereocontrol in organic synthesis.