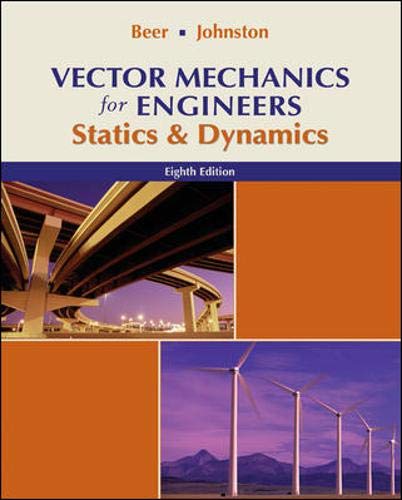 For the past fifty years Beer and Johnston have been the uncontested leaders in the teaching of undergraduate engineering mechanics. Over the years their textbooks have introduced significant theoretical and pedagogical innovations in statics, dynamics, and mechanics of materials education. At the same time, their careful presentation of content, unmatched levels of accuracy, and attention to detail have made their texts the standard for excellence.
The new Eighth Edition of Vector Mechanics for Engineers: Statics and Dynamics marks the fiftieth anniversary of the Beer/Johnston series. Continuing in the spirit of its successful previous editions, the Eighth Edition provides conceptually accurate and thorough coverage together with a significant addition of new problems, including biomechanics problems, and the most extensive media resources available.

Born in France and educated in France and Switzerland, Ferdinand Beer held an M.S. degree from the Sorbonne and an Sc.D. degree in theoretical mechanics from the University of Geneva. He came to the United States after serving in the French army during the early part of World War II and taught for four years at Williams College in the Williams-MIT joint arts and engineering program. Following his service at Williams College, Beer joined the faculty of Lehigh University, where he taught for thirty-seven years. He held several positions, including the University Distinguished Professors Chair and Chairman of the Mechanical Engineering and Mechanics Department. In 1995, Beer was awarded an honorary Doctor of Engineering degree by Lehigh University.