Elements of Philosophy: An Introduction 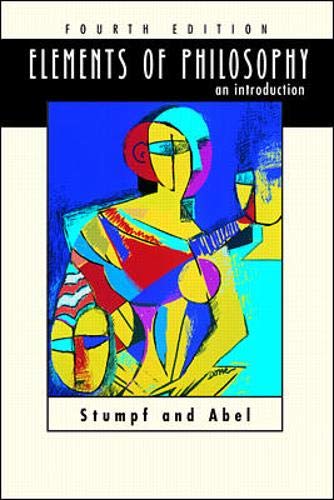 The new edition of this introductory text presents, in an accessible way, classical and contemporary readings on topics central to and representative of all major periods of the Western philosophical tradition. The book presents 55 readings (23 of which are new to the fourth edition) on seven topics: epistemology, philosophy of religion, metaphysics, personal identity and immortality, free will and determinism, ethics, and political and social philosophy. Pedagogical features make these readings accessible and interesting to beginning students. All the introductions and biographical sketches have been revised for the fourth edition, as have the study questions and glossary. The explanatory footnotes and the stylistic modernization of texts are new to the fourth edition.

Samuel Enoch Stumpf was Emeritus Professor of Philosophy and Emeritus Professor of Law at Vanderbilt University prior to his death in 1998, at the age of eighty. He earned a B.S. in Business and Finance from the University of California at Los Angeles, a B.D. in Theology from Andover Newton Theological School, and a Ph.D. in Philosophy from the University of Chicago. He joined the Vanderbilt faculty in 1948 and served as Chair of the Philosophy Department from 1952 to 1967. After a five-year term as President of Cornell College, Professor Stumpf returned to Vanderbilt, where he remained until his retirement in 1984. Professor Stumpfs publications include Democratic Manifesto (1954), Morality and the Law (1966), and four McGraw-Hill textbooks: Socrates to Sartre: A History of Philosophy (1966; 6th ed., posthumous, 1999); Philosophical Readings: Selected Problems (1971; 4th ed., 1994); Philosophy: History and Problems (1971; 5th ed., 1994); and Elements of Philosophy: An Introduction (1979; 3rd ed., 1993).