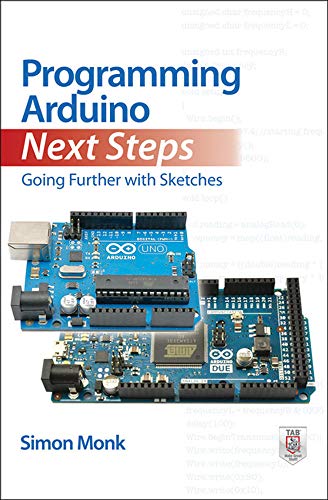 Take your Arduino skills to the next level!

In this practical guide, electronics guru Simon Monk takes you under the hood of Arduino and reveals professional programming secrets. Featuring coverage of the Arduino Uno, Leonardo, and Due boards, Programming Arduino Next Steps: Going Further with Sketches shows you how to use interrupts, manage memory, program for the Internet, maximize serial communications, perform digital signal processing, and much more. All of the 75+ example sketches featured in the book are available for download.

Learn advanced Arduino programming techniques, including how to:

Dr. Simon Monk has a degree in Cybernetics and Computer Science and a PhD in Software Engineering. He spent several years as an academic before he returned to industry, co-founding the mobile software company Momote Ltd. Dr. Monk has been an active electronics hobbyist since his early teens and is a full-time writer on hobby electronics and open source hardware. He is the author of numerous electronics books, including Programming the Raspberry Pi: Getting Started with Python; Programming Arduino: Getting Started with Sketches; 30 Arduino Projects for the Evil Genius; Arduino + Android Projects for the Evil Genius, and Practical Electronics for Inventors, Third Edition (co-author).