Programming Arduino Getting Started with Sketches 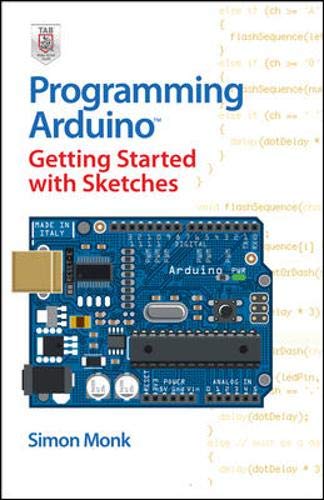 Using clear, easy-to-follow examples, Programming Arduino: Getting Started with Sketches reveals the software side of Arduino and explains how to write well-crafted sketches using the modified C language of Arduino. No prior programming experience is required! The downloadable sample programs featured in the book can be used as-is or modified to suit your purposes.

In December 2011, Arduino 1.0 was released. This changed a few things that have caused two of the sketches in this book to break. The change that has caused trouble is that the classes 'Server' and 'Client' have been renamed to 'EthernetServer' and 'EthernetClient' respectively. To fix this:

Make Great Stuff!
TAB, an imprint of McGraw-Hill Professional, is a leading publisher of DIY technology books for makers, hackers, and electronics hobbyists.

Dr. Simon Monk has a degree in Cybernetics and Computer Science and a PhD in Software Engineering. He spent several years as an academic before he returned to industry, co-founding the mobile software company Momote Ltd. He has been an active electronics hobbyist since his early teens and is an occasional author in hobby electronics magazines. Simon is also author of 30 Arduino Projects for the Evil Genius and 15 Dangerously Mad Projects for the Evil Genius.