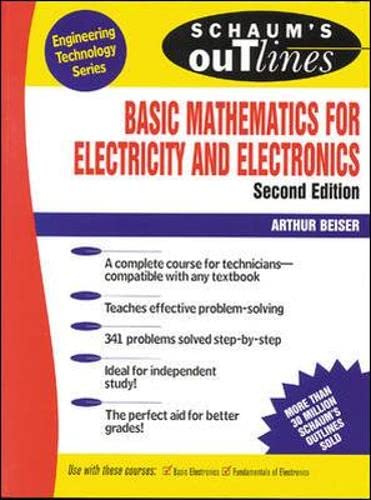 Fortunately for you, there's Schaum's Outlines. More than 40 million students have trusted Schaum's to help them succeed in the classroom and on exams. Schaum's is the key to faster learning and higher grades in every subject. Each Outline presents all the essential course information in an easy-to-follow, topic-by-topic format. You also get hundreds of examples, solved problems, and practice exercises to test your skills.

This Schaum's Outline gives you

Fully compatible with your classroom text, Schaum's highlights all the important facts you need to know. Use Schaum's to shorten your study time-and get your best test scores!

Arthur Beiser, a native of New York City, received B.S., M.S., and Ph.D. degrees in physics from New York University, where he later served as Associate Professor of Physics. He then was a Senior Research Scientist at the Lamont Geo- logical Observatory of Columbia University. His research interests were chiefly in cosmic rays and in magnetohydrodynamics as applied to geophysics and astrophys- ics. In addition to theoretical work, he participated in a cosmic-ray expedition to an Alaskan peak and directed a search for magnetohydrodynamic waves from space in various Pacific locations. A Fellow of The Explorers Club, Dr. Beiser was the first chairman of its Committee on Space Exploration. He is the author or coauthor of 36 books, mostly college texts on physics and mathematics, 14 of which have been translated into a total of 27 languages. Two of his books are on sailing, The Proper Yacht and The Sailors World. Figure 13-21 is a photograph of Dr. Beiser at the helm of his 58-ft sloop; he and his wife Germaine have sailed over 150,000 miles, includ- ing two Atlantic crossings and a rounding of Cape Horn. Germaine Beiser, who has degrees in physics from the Massachusetts Institute of Technology and New York University, is the author or coauthor of seven books on various aspects of physics and has contributed to The Physical Universe. For a number of years she was the editor of a cruising guide to the Adriatic Sea.

This is a solved-problems Outline of mathematical calculations for electricity and electronics technicians. All major types of problems are included. This edition will continue to follow the course trends as covered in the leading textbooks such as "Singer and Forster", and "Zbar". A new chapter on network theorems will introduce theorems of Thevenin, Norton, and Millman. Additions to other chapters will include impedance matching (AC and DC); superposition theorem and voltage dividers; and, voltampere reactive power (VAR power). The use of electronic calculators will be included. A mix of SI and customary units will occur throughout.