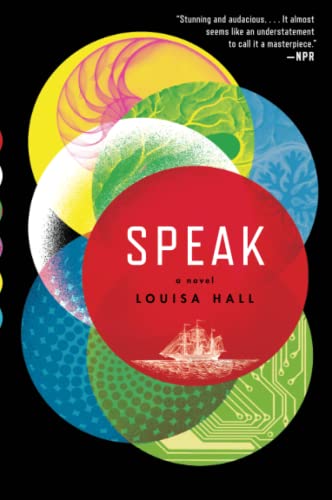 "SPEAK is that rarest of finds: a novel that doesn't remind me of any other book I've ever read. A complex, nuanced, and beautifully written meditation on language, immortality, the nature of memory, the ethical problems of artificial intelligence, and what it means to be human."--Emily St. John Mandel, author of Station Eleven

"SPEAK reads like a hybrid of David Mitchell and Margaret Atwood; a literary page turner that spans four centuries and examines the idea of who and what we define as human. Louisa Hall has written a brilliant novel."--Philipp Meyer, author of The Son

"strange, beautiful and unputdownable"--New York Post, "The Best Novels to Read this Summer"

"While the novel's ambitions are high-concept, Hall's narrative is notable for its persuasive heart... Speak gazes boldly forward and lovingly back in order to report on the nature of what it means to be human now."--Elle

"Hall delivers a dystopian A.I. novel with real heart and soul. Told through 17th century diary entries, letters by Alan Turing, court transcripts in 2040 and instant messages between a bot and a young, brokenhearted girl, this book is strange, beautiful and unputdownable."--New York Post, Summer Round Up

"[A] stunning new novel... Comparisons to Margaret Atwood, David Mitchell, and Helen Phillips will abound, but the remarkable Speak is a unique creation that stands on its own." -Bustle--Bustle.com

"Stunning and audacious... It's not just one of the smartest books of the year, it's one of the most beautiful ones, and it almost seems like an understatement to call it a masterpiece."--NPR

"Louisa Hall grapples with what it means to be human and how artificial intelligence will fit into those definitions in her ambitious new novel... It's a complicated but compulsively readable tale, blending the voices of people who wonder whether they'll ever be heard or, more importantly, understood."--Austin American-Statesman

"Speak leaves its conclusions to its readers, to flip back and forth among the characters' differing points of view and decide for themselves - and is all the more engaging for it."--Salt Lake Tribune

"Enter Louisa Hall's remarkable July novel Speak, which features not one, but five narrators: each inhabits separate geographical and temporal locations, but all reflect, in some way, on humanity's relationship with artificial intelligence."--Bustle, What You Should Read This Summer Based On Your Zodiac Sign

Exploring the creation of artificial intelligence and illuminating the very human need for communication, connection and understanding, a thought-provoking novel is told from the perspectives of five very different people from different times and places. 40,000 first printing.