Verwandte Artikel zu Me, Inc.: Build an Army of One, Unleash Your Inner...

Simmons, Gene Me, Inc.: Build an Army of One, Unleash Your Inner Rock God, Win in Life and Business

Me, Inc.: Build an Army of One, Unleash Your Inner Rock God, Win in Life and Business 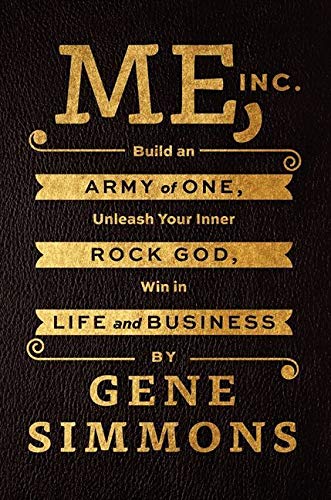 "The hard-learned wisdom laid out here is a road map for success that anyone can benefit from." -- John Varvatos, from his foreword for Me, Inc. "You literally can turn to any page, pick a random sentence and likely find potent words of wisdom." -- Wall Street Journal "Underneath Kiss bassist Gene Simmons's makeup is a shrewd businessman. In this advice book, he doles out tips for entrepreneurs and anyone who wants to get ahead." -- Parade "The only time it's acceptable to take advice from someone in Kabuki makeup and a metal plated codpiece is when he's sold more than 20 million albums and has 10 platinum records. And let's not get started on the thousands of Kiss licensing deals Simmons helped bring to the band." -- Fortune "Why should we do what Simmons says? Well, for starters, Simmons-a notorious rock star, raconteur, and business maven-has a global cultural recognition just a few pegs below Mickey Mouse, Coca-Cola, and Superman." -- Men's Health "Brutally honest business advice ... Simmons ... distills 40 years of leading the global-phenomenon rock band, which has franchised into a billion pieces of merchandise, including everything from comic books to a coffee shop." -- New York Post

Me, Inc. features a black simulated-leather cover with gold foil stamping and a black ribbon bookmark. The fact that KISS is one of the most successful rock bands in the world is no accident. From the beginning Gene Simmons and Paul Stanley had a clear-cut vision of what they wanted to do and how they wanted to operate KISS as a business well before they ever first took the stage. Since deciding with Paul to manage the band themselves, Simmons has proved himself to be a formidable businessman, having sold over 100 million CDs and DVDs worldwide, overseen over 3,000 licensed merchandise items, and starred in the longest running celebrity reality show to date. More impressive is that he handles all of his business ventures on his own-no personal assistant, few handlers, and as little red tape as possible. In Me, Inc., Simmons shares a lifetime of field-tested and hard-won business advice that will provide readers with the tools needed to build a solid business strategy, harness the countless tools available in the digital age, network like hell, and be the architect for the business entity that is you. Inspired by The Art of War, the book dispenses Simmons' in-depth insights via thirteen specific principles for success based on his own experience, triumphs, and instructional failures in business-from finding the confidence within yourself that's necessary to get started, to surrounding yourself with the right people to partner with and learn from, to knowing when to pull the plug and when to double-down. These thirteen principles are a skeleton key into a world of success, freedom, peace of mind and, most importantly, financial success.

1. Me, Inc.: Build an Army of One, Unleash Your Inner Rock God, Win in Life and Business