Verwandte Artikel zu Seven Wonders 05: The Legend of the Rift

Lerangis, Peter Seven Wonders 05: The Legend of the Rift

Seven Wonders 05: The Legend of the Rift 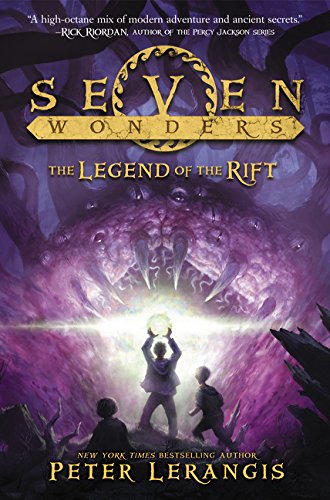 Jack, Marco, Cass, and Aly’s quest to find the seven magic orbs buried beneath each of the Seven Wonders of the Ancient World has hit a perilous snag. King Uhla’ar has kidnapped Aly and taken her and an orb back through a rift in time. A giant, merciless behemoth guards the opening, and so Jack and his friends realize that their only hope to rescue Aly is to rush to find the rest of the lost Loculi. This mission takes them around the world—to the Temple of Artemis to fend off a mighty army and then to the Lighthouse of Alexandria, where they wind up swallowed in the belly of a beast. But before all is said and done, they must return to where it all began, to Atlantis, to save Aly, themselves...and the world.

Thirteen-year-old Jack McKinley and his friends have fought shoulder-to-shoulder in an almost impossible mission to recover the lost Loculi hidden in the Seven Wonders of the Ancient World. They have defeated the Colossus of Rhodes, visited Ancient Babylon, outfoxed legions of undead, and battled one of history’s most powerful kings to recover four Loculi, but these successes have come at a price. Friends have been lost, ancient artifacts destroyed, and the very powers they’ve developed will soon overwhelm them. With a new threat to their mission developing, time is quickly running out to find the last of the lost Loculi.

When the friends unwittingly released the long-imprisoned King Uhla’ar from inside the lost Statue of Zeus, the Atlantean leader managed to escape their traps, kidnap Aly, and travel back through a rift in time and space with a Loculus in hand. With a key piece to the puzzle missing, the balance of magic has been thrown off and the lost continent has become unstable. The Select’s only chance to save their friend and the world is to finish their quest now.

The Select set off on a final, epic adventure to the Temple of Artemis at Ephesus and the Lighthouse of Alexandria—in order to unearth the last missing Loculi. Only then can they dare go back through the rift to save Aly, defeat King Uhla’ar, and recover the Loculus of Strength before it’s lost to time. It’s a race against the end of times in the thrilling conclusion of the New York Times bestselling Seven Wonders series from master storyteller Peter Lerangis.

“A high-octane mix of modern adventure and ancient secrets, The Colossus Rises is Lerangis’s most gripping work yet. Young readers will love this story. I can’t wait to see what’s next in the Seven Wonders series!”—Rick Riordan, author of the Percy Jackson series

“A great mix of adventure, mystery, and suspense.”—Time For Kids

“Fans will get hooked on the mysteriousness of it all!”—Kirkus Reviews