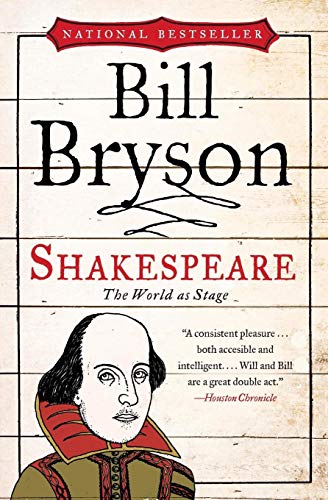 A portrait of the bard is presented in the style of a travelogue based on interviews with actors, the curator of Shakespeare's Birthplace, and academics, in an account that also shares the author's whimsical recollections of his own adventures in Stratford-upon-Avon. Reprint. 50,000 first printing.

Bill Bryson was born in Des Moines, Iowa, in 1951. A backpacking expedition in 1973 brought him to England, where he met his wife. He worked as an editor for the English newspapers The Times and The Independent for many years, also contributing travel articles. He lived with his wife and four children in North Yorkshire until 1995, when they moved back to the States, taking up residence in Hanover, New Hampshire. In 2003 they return to England and now live in Norfolk.

The Lost Continent, Bryson s hilarious first travel book, chronicles a trip in his mother s Chevy around small-town America. Since then, he has written several more books about the U.K. and the U.S. including notable bestsellers A Walk in the Woods, I m a Stranger Here Myself, and of his visit to Australia, In A Sunburnt Country.

His other books include Bill Bryson s Dictionary of Troublesome Words, Neither Here nor There: Travels in Europe, Made in America, The Mother Tongue, and Bill Bryson s African Diary. His latest book is A Short History of Nearly Everything.