Verwandte Artikel zu From Third World to First (Singapore and the Asian...

From Third World to First (Singapore and the Asian economic boom) 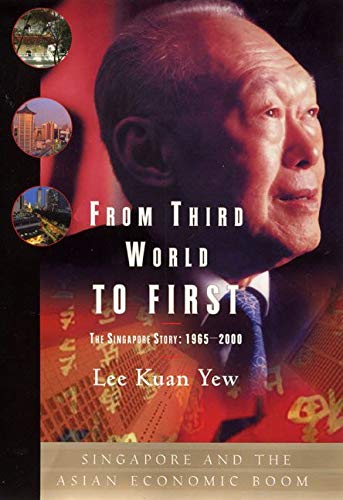 Lee Kuan Yew is one of the most influential leaders in Asia. In this illuminating account, Lee writes frankly about his disapproving approach to political opponents and his often unorthodox views on human rights, democracy, and inherited intelligence, aiming always “to be correct, not politically correct.”

Since it’s independence in 1965, tiny Singapore – once a poor and decrepit colony – has risen to become a rich and thriving Asian metropolis.

From Third World to First is a fascinating and insightful account of Singapore’s survival from a history of oppressive colonialism, the Second World War and major poverty and disorder.

Lee also uses previously unpublished official government reports and papers to explain how he led a tiny country into becoming a prosperous and secure modern society, amid the constant hostility of world politics.

Today Singapore boasts not only to have the busiest port of trade, best airport with the world’s number one airline, but also the world’s fourth-highest per capita real income? An Island hailed as the city of the future, Singapore’s miraculous history is dramatically recounted by the man who not only lived through it all but fearlessly forged ahead and brought about most of the changes.

Lee highlights is relationships with his political peers from Margaret Thatcher and Ronald Reagan to George Bush and poetry-spouting Jiang Zemin. Also a father of three Lee writes warmly of his family life.

From Third World to First offers readers a compelling glimpse not only into the heart but also the mind of an incredibly influential man who is impossible to ignore in Asian and international politics.

1. From Third World to First (Singapore and the Asian economic boom)