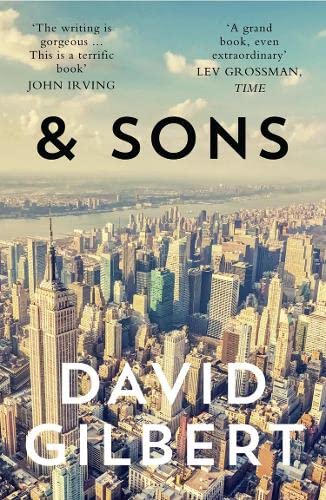 ‘Richly entertaining ... beautifully realised and very funny ... A book [which] has the rare quality of being funny without being silly, serious without being solemn, and powerfully moving without being either sentimental or coercive’ Guardian

‘This is a magisterial novel, complex, sophisticated, filled with literary play ... Impressive stuff from a serious talent’ Daily Mail

‘A sprawling family saga of moneyed New York, written in highly wrought prose replete with Updikean flourishes. We immediately identify Gilbert with Franzen and his realist forebears ... There is much to admire in “& Sons”, it is ambitious and often beautiful’ Observer

‘Hugely energetic ... engrossing and superbly done ... His novel’s 400-plus pages zip by in a rush of accessible, highbrowish pleasure ... [An] intelligent, enthralling novel’ Sunday Times

‘I was floored by the sparkle and brilliance ... superbly written, wonderfully entertaining and often outrageously funny’ Times

‘[An] elegant, witty second novel ... Gilbert’s stylistic gifts are beyond question, and the novel is rich in well-turned phrases ... The novel is also very funny ... At the heart of the book is a reunion of the Dyers, a scene as closely observed as anything in Jonathan Franzen’s “The Corrections” ... This is a terrific social comedy’ Sunday Telegraph, Seven

‘A singularly brilliant novel ... [which] marks David Gilbert out as a writer of exceptional talent’ Literary Review

‘A breathtaking work of a sweep that we rarely see over here tackling themes at the very heart of existence itself ... a tour de force ... This is a huge new talent on the scene. Greatness awaits’ Sunday Express

Who is A. N. Dyer? For fans of ‘The Art of Fielding’ and ‘Wonder Boys’ – this is the panoramic, deeply affecting story of an iconic novelist and the heartbreaking truths that fiction can hide.

The Manhattan funeral of Charles Henry Topping would have been a minor affair but for the identity of the eulogist: reclusive author A. N. Dyer, whose novel ‘Ampersand’ stands as a classic of teenage angst. Now Andrew Newbold Dyer takes stock of his own life, the people he’s hurt and the novel that will endure as his legacy. He realises he must reunite with his three sons before it’s too late.

Eldest son Richard is a screenwriter in Californian exile. In the middle is Jamie, who has spent his life capturing the sorrow that surrounds him. And last is Andy, now a pupil at the boarding school that inspired ‘Ampersand’. It is only when the hidden purpose of the reunion comes to light do the sons realise what’s at stake – for their father, themselves and three generations of Dyers.

Daring, entertaining and insightful, ‘& Sons’ establishes David Gilbert as a writer to be treasured.