Ashdown, Paddy The Cruel Victory: The French Resistance, D-Day and the Battle for the Vercors 1944

The Cruel Victory: The French Resistance, D-Day and the Battle for the Vercors 1944 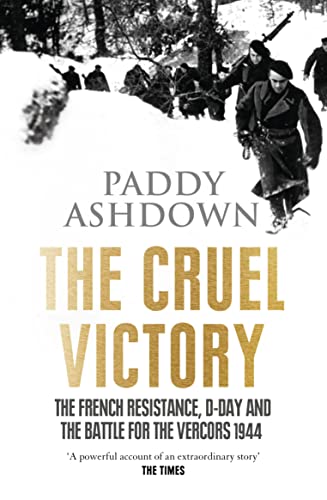 ‘Excellent in showing how men across France mobilised. For Ashdown, Vercors is the “hidden story of D-Day” and he tells it with panache and great attention to detail.’ Sunday Express

‘A powerful account of an extraordinary story.’ The Times

‘Paddy Ashdown has produced not only the most thorough history to date of the Resistance in the Vercors, but also the startling new contention that, ‘The Germans did not win on the Vercors. They lost.’ Written with pace, the detail is fine... and Ashdown is well-placed to write this book, which requires an understanding of military strategy, diplomacy and political shenanigans, as well as old fashioned story telling skill.’ Spectator

‘A moving chronicle, Ashdown brings his own military experience to telling the tragic story of Vercors’ BBC History magazine

From best-selling author of ‘A Brilliant Little Operation’, winner of the British Army Military History prize and the Royal marines History prize for 2013, comes the long neglected D-Day story of the Resistance uprising and subsequent massacre on the Vercors massif – the largest action by the French Resistance during the Second World War.

In 1941 factions of the French Resistance began to plot against their German occupiers. Aided by Allied arms and secret agents, they would seize the mountainous Vercors plateau in south-eastern France in a D-Day uprising intended to divert the Nazis from the Normandy beaches. But when muddled Allied strategy in London and Algiers left them abandoned, the 4,500 young fighters were left to face the might of the German Army alone.

‘The Cruel Victory’ gives voice to the young fighters who fought the largest Resistance battle of the war. It is a story of how early idealism can turn to despair, and of the cost to those on the front line of battle when those at the top know too little about the harsh realities of war. It is a human story of heroic proportion.