Verwandte Artikel zu A Game of Thrones: A Storm of Swords Part 2 (A Song...

Martin, George R.R. A Game of Thrones: A Storm of Swords Part 2 (A Song of Ice and Fire)

A Game of Thrones: A Storm of Swords Part 2 (A Song of Ice and Fire) 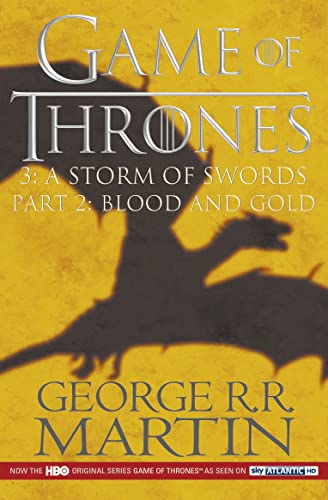 ‘Colossal, staggering... Martin captures all the intoxicating complexity of the Wars of the Roses or Imperial Rome in his imaginary world ... one of the greats of fantasy literature’
SFX

‘This is one of those rare and effortless reads’ ROBIN HOBB

‘George R.R. Martin is one of our very best writers, and this is one of his very best books’ RAYMOND E. FEIST

‘Such a splendid tale. I read my eyes out – I couldn’t stop till I’d finished and it was dawn’ ANNE MCCAFFREY

‘Few created worlds are as imaginative and diverse’ JANNY WURTS

HBO’s hit series A GAME OF THRONES is based on George R R Martin’s internationally bestselling series A SONG OF ICE AND FIRE, the greatest fantasy epic of the modern age.

A STORM OF SWORDS: BLOOD AND GOLD is the SECOND part of the third volume in the series.

‘There is no better distraction than these magic tales’ Guardian

The Starks are scattered.

Robb Stark may be King in the North, but it will be a bloody struggle for him to hold his crown. And while his youngest sister has escaped the clutches of the depraved Lannisters, Sansa Stark remains their captive.

Meanwhile, across the ocean, Daenerys Stormborn, the last heir of the Dragon King, approaches Westeros with vengeance in her heart.

A STORM OF SWORDS, PART TWO: BLOOD AND GOLD, the second half of Book Three of A Song of Ice and Fire, continues the greatest fantasy epic of the modern age.