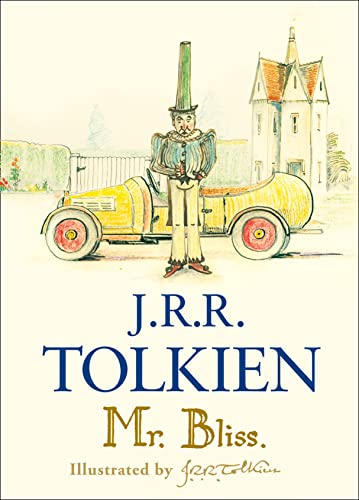 ‘Owes a little to Beatrix Potter in its ironical humour and to Edward Lear in the style of its drawings, though Tolkien’s approach is less grotesque and more delicate than Lear’s.’ Humphrey Carpenter

‘A celebration, in the spirit of The Wind in the Willows, of a vanished, vulgar England where everybody did – and spoke – exactly as he pleased, and life was consequently a series of amiable abrupt collisions, feebly refereed by the police in the shape of Sergeant Boffin. Although the book ought to feel dated, ... dating has done little harm to Tom Kitten or Mr Badger, and there seems no reason why it should here.’ Tom. Shippey, Times Literary Supplement

The first ever trade edition of Tolkien’s illustrated tale about the eccentric Mr Bliss, a man notable for his immensely tall hats and for the girabbit in his garden, whose whimsical decision to buy a motor car quickly becomes a catalogue of disasters.

Professor J.R.R. Tolkien invented and illustrated the book of Mr Bliss’s adventures for his own children when they were very young. The book was handwritten with lots of detailed and uproarious colour pictures.

This is a complete and highly imaginative tale of eccentricity. Mr Bliss, a man notable for his immensely tall hats and for the girabbit in his garden, takes the whimsical decision to buy a motor car. But his first drive to visit friends quickly becomes a catalogue of disasters. Some of these could be blamed on Mr Bliss’s style of driving, but even he could not anticipate being hijacked by three bears. As for what happened next – the readers, whether young or old, will want to discover for themselves.

Redesigned using new archival scans of Tolkien’s original drawings, MR BLISS is presented for the first time in a conventional trade format, sure to delight Tolkien fans of all ages.