Verwandte Artikel zu Coco Chanel: The Legend and the Life

Picardie, Justine Coco Chanel: The Legend and the Life

Coco Chanel: The Legend and the Life 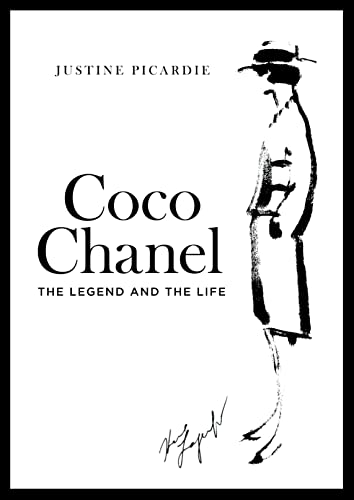 ‘Gripping... In the deftest prose, Picardie plots one of the most extraordinary lives of the 20th Century. The book is lavishly illustrated, too, with images of iconic outfits and intimate photos from Chanel's private albums.’ Mail on Sunday

‘The French fashion icon finds a shrewd and sympathetic interpreter in Justine Picardie... this handsome volume cleverly blends the life and afterlife of the enigma who became a brand.’ The Independent

‘Justine Picardie’s vividly told account of Coco Chanel’s life has all the elements of a novel: the mystery, the sense of loss, the quest for fame and fortune, the distinguished lovers... in the style of Chanel herself.’ Daily Mail

‘[An] elegant book...The Chanel uncovered by Picardie is a storyteller [who] spun her own myth... Coco has, in these pages, come out of hiding.’ The Telegraph

‘The darker facets [of Chanel] are subtly and carefully revealed by Justine Picardie.’ Wall Street Journal

‘Justine Picardie sheds new light on the darker truths behind the glossy myth... Guaranteed to be the most well-read accessory at London Fashion Week.’ Daily Express

‘Justine Picardie’s thoughtful and beautifully illustrated Life ... illuminates the iconoclast who might justifiably be said to have invented the twentieth-century woman.’ Times Literary Supplement

Justine Picardie spent years puzzling over the truth about Coco Chanel, peeling away the accretions of romance and lies. Since its publication in 2010, hers has become the definitive Chanel biography. With a new foreword and previously unseen images, this new edition delves even deeper into the life and legacy of this eternally alluring woman.

Coco Chanel was an extraordinary inventor - she conjured up the little black dress, bobbed hair, trousers for women, contemporary chic, best-selling perfumes, and the most successful fashion brand of all time - but she also invented herself, fashioning the myth of her own life with the same dexterity as her couture.

While Chanel was supreme innovator and vendor of all things elegant and beautiful, what lies beneath her own glossy myth is far darker. Throwing new light on her passionate and turbulent relationships, this beautifully constructed portrait gives a fresh and penetrating look at how Coco Chanel made herself into her own most powerful creation.

Justine Picardie brings the mysterious Gabrielle Chanel out of hiding, to celebrate her great achievements. She examines Chanel's enduring afterlife, as well as her remarkable life, uncovering the consequences of what she covered up, unpicking the seams between truth and legend, yet keeping intact the real fabric of her past.

1. Coco Chanel : The Legend and the Life

Buchbeschreibung Harper Collins Publ. UK Sep 2011, 2011. Taschenbuch. Zustand: Neu. Neuware - The much anticipated and beautifully illustrated COCO CHANEL: The Legend and the Life was first released to great critical acclaim in 2010. This is the definitive biography of a heroine who founded the most successful fashion label in historyCOCO CHANEL: The Legend and the Life was written by Justine Picardie as a celebration and investigation of Chanel's phenomenal achievements. Shortlisted for the Galaxy National Book Awards, selling over 50,000 copies thus far, and now translated into 15 languages worldwide, this eloquent biography has revealed the hidden secrets of the legendary Chanel. 343 pp. Englisch. Artikel-Nr. 9780007318995