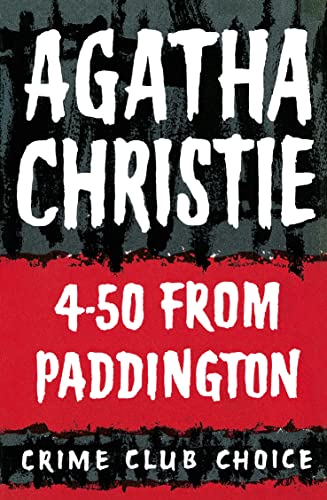 4.50 from Paddington (Facsimile of the 1957 Collins Crime Club first edition)

A facsimile first edition hardback of the Miss Marple books, published to mark the 75th anniversary of her first appearance and to celebrate her new-found success on television.

When The Murder at the Vicarage was published in October 1930, little did the literary world realise that Agatha Christie, already famous for her early Poirot titles, was introducing a character who would become the best-loved female sleuth of all time. The 14 Marple books would appear at intervals over the next 49 years, with Miss Marple's Final Cases published in 1979, three years after Agatha's death.

To mark the 75th anniversary of Miss Marple's first appearance, and to celebrate her renewed fortunes as a primetime television star, this collection of facsimile first editions will be the perfect way to enjoy these books in their original form – 12 novels and two short story collections. Reproducing the original typesetting and formats from the first editions from the Christie family's own archive copies, these books sport the original covers which have been painstakingly restored from the best available copies, reflecting five decades of iconic cover design.

Agatha Christie was born in Torquay in 1890 and became, quite simply, the best-selling novelist in history. Her first novel, The Mysterious Affair at Styles, written towards the end of the First World War, introduced us to Hercule Poirot, who was to become the most popular detective in crime fiction since Sherlock Holmes. She is known throughout the world as the Queen of Crime. Her books have sold over a billion copies in the English language and another billion in over 100 foreign languages. She is the author of 80 crime novels and short story collections, 19 plays, and six novels under the name of Mary Westmacott.