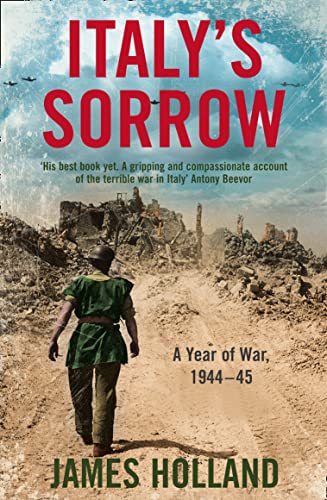 ‘James Holland has written his best book yet, a gripping, yet compassionate account of the terrible war in Italy, with a memorable depiction of civilian suffering.’ Antony Beevor

'Impeccably researched and ingeniously structured ... "Italy's Sorrow" is a splendid account of an often overshadowed campaign by a historian who has already given us excellent studies of the Siege of Malta and the Desert War.' Daily Express

'The suffering of Italy's innocents deserves to be commemorated. James Holland's excellent book does that and much more, confirming his place in the first rank of contemporary military historians.' Mail on Sunday

'Assiduously researched, enthusiastically narrated ... it is hard to believe that this will not be the definitive account of the battle for Italy.' Daily Telegraph

Today Italy is a land of beauty and prosperity but in 1944-45 it had become a place of nightmares, a land of violence, war, and destruction. James Holland's ground-breaking account expertly documents the German advance and a segment of Italian history that has been largely neglected.

The war in Italy was the most destructive campaign in the west as the Allies and Germans fought a long, bitter and highly attritional conflict up the mountainous leg of Italy during the last twelve months of the Second World War. For front-line troops, casualties rates at Cassino and then along the notorious Gothic Line were as high as they had been along the Western Front in the First World War. There were further similarities too: blasted landscapes, rain and mud. For the men who fought there, Italy really was the hardest campaign.

And while the Allies and Germans were slogging it out through the mountains, the Italians were fighting their own battles, one where Partisans and Fascists were pitted against each other in a bloody civil war. Around them, civilians tried to live through the carnage, terror and anarchy while, in the wake of the Allied advance, beleaguered and impoverished Italians were forced to pick their way through the ruins of their homes and country and often forced into making terrible and heart-rending decisions in order to survive.

'Italy's Sorrow' is the first account of the war in that most beautiful of countries to tell the story from all sides and to include the experiences of soldiers and civilians alike. Offering extensive new research, it weaves together the drama and tragedy of a terrible year of war with new perspectives and material on some of the most debated episodes to have emerged from the Second World War. It is a magnificent achievement by one of our finest young military historians.