Verwandte Artikel zu A Storm of Swords: Part 2 Blood and Gold (A Song of... 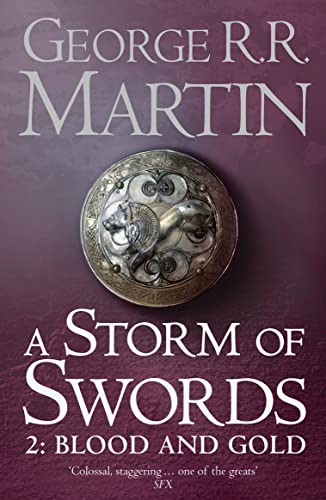 ‘Of those who work in the grand epic fantasy tradition, George R.R. Martin is by far the best’
Time magazine

‘Colossal, staggering... all the intoxicating complexity of the Wars of the Roses or Imperial Rome’
SFX

‘The sheer mind-boggling scope of this epic has sent other fantasy writers away shaking their heads... Its ambition: to construct the Twelve Caesars of fantasy fiction, with characters so venomous they could eat the Borgias’
Guardian

The third volume, part two of A SONG OF ICE AND FIRE, the greatest fantasy epic of the modern age. GAME OF THRONES is now a major TV series from HBO, featuring a stellar cast.

The Starks are scattered.

Robb Stark may be King in the North, but he must bend to the will of the old tyrant Walder Frey if he is to hold his crown. And while his youngest sister, Arya, has escaped the clutches of the depraved Cersei Lannister and her son, the capricious boy-king Joffrey, Sansa Stark remains their captive.

Meanwhile, across the ocean, Daenerys Stormborn, the last heir of the Dragon King, delivers death to the slave-trading cities of Astapor and Yunkai as she approaches Westeros with vengeance in her heart.

Buchbeschreibung Harpercollins UK. Taschenbuch. Zustand: Neu. Neuware - The Seven Kingdoms are divided by revolt and blood feud, and winter approacheslike an angry beast. Beyond the Northern borders, wildlings leave their villages to gather in the ice and stone wasteland of the Frostfangs. From there, the renegade Brother Mance Rayder will lead them South towards the Wall. Robb Stark wears his new-forged crown in the Kingdom of the North, but his defences are ranged against attack from the South, the land of House Stark's enemies the Lannisters. His sisters are trapped there, dead or likely yet to die, at the whim of the Lannister boy-king Joffrey or his depraved mother Cersei, regent of the Iron Throne. And Daenerys Stormborn will return to the land of her birth to avenge the murder of her father, the last Dragon King on the Iron Throne. 637 pp. Englisch. Artikel-Nr. 9780007119554