Verwandte Artikel zu Luther: Man Between God and the Devil

Oberman, Heiko Luther: Man Between God and the Devil

Luther: Man Between God and the Devil 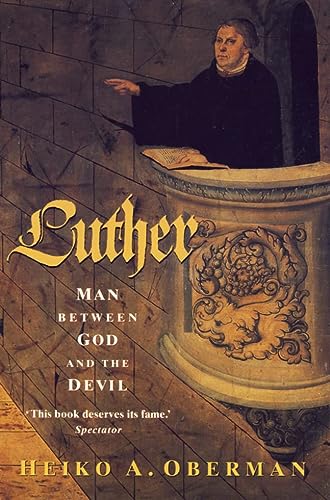 This biography is a reassessment of the life and work of the Protestant reformer, Luther. The book considers what Luther intended, and what he accomplished when he challenged the ruling powers of the Catholic Church. The movement he initiated changed the social, political, intellectual and religious structures of Western history. Oberman presents an account of a man too often portrayed as a saint or a devil.

“When Martin Luther challenged the ruling powers of his time, the movement he initiated changed the social, political, intellectual and religious structures of western history. But what did Luther intend, and what did he actually accomplish? Heiko Oberman, internationally recognised as one of the most distinguished historians of the Reformation, addresses these questions in this readable book. Presenting a vivid portrait of a man too often portrayed as a saint or a devil, Oberman shows how Luther – passionate, courageous and stubborn – simultaneously aroused fierce loyalty in his admirers and violent antagonism among his enemies.
ELAINE PAGELS

“Oberman rivets attention on Luther as he was. He prods the reader to set aside views mediated by tradition and prejudice. Yet, paradoxically, by locking Luther in the past and showing us our distance from him, he unlocks a truer Luther for the present; Luther’s passionate commitment and dynamism are freshly provocative. Oberman’s hallmark is to combine rigorous historical scholarship with theological sensitivity. The book is a milestone in Reformation studies.”
SUSAN MOORE, 'Scotsman'

“Oberman makes such good sense of the man that all other attempts to explain him, as a maniac, or a martyr to constipation, or as a saint, seem trivial by comparison.”
ERIC CHRISTIANSEN, 'Spectator'

“This remarkable study, combining learning, realism, and literary adroitness, brings us close to Luther. Above all, it conveys Luther’s power: the intensity of his faith, the coherence of his thought, the force of his personality.”
NEW YORKER

“This magnificent biography...is teeming with ideas and is altogether worthy of its great, gutsy subject.”
HARRY REID, 'Glasgow Herald'

“If the world is to gain from Luther it must turn to the real Luther – furious, violent foul-mouthed, passionately concerned. Him it will find in Oberman’s book, a labour of love.”
GEOFFREY ELTON, 'Journal of Ecclesiasical History'